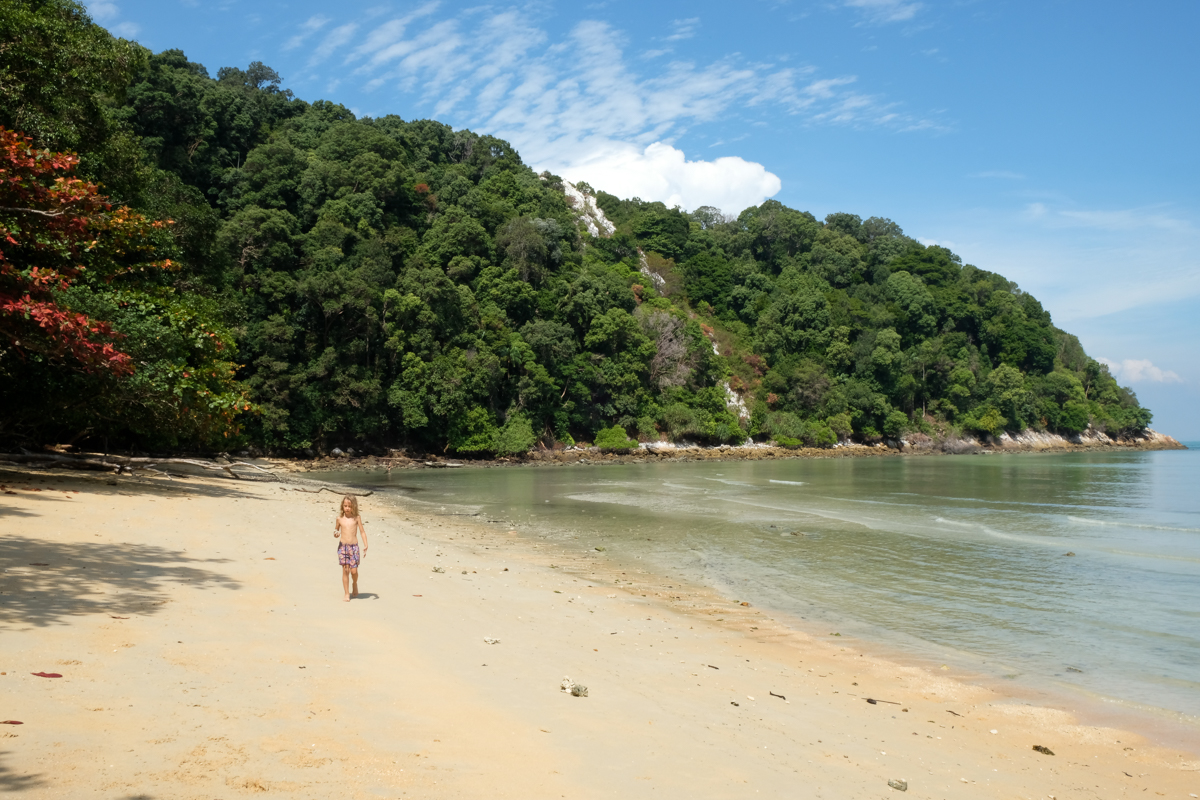 It’s been months ago.

we landed in Kuala Lumpur and were picked up by friends we had met in Thailand 2 years earlier – to Port Dickson. We spent a week there, celebrated a beautiful children’s birthday and were at the sea and in a turtle rescue station. It was really great to see that the animals were taken care of here, but at the same time an aquarium was connected to the station. There, as in any other zoo, the animals in a confined space are doomed to make their tiny rounds in the aquarium every day. Turtles and reptiles were also “exhibited” in the smallest terrariums. This “putting oneself above” nature and subjecting everything (even oneself) must soon stop, for the sake of our own future!

In the park in front of the Petronas Twin Towers, with a big pool and a playground, were only children allowed to splash in the water, and it was forbidden for the adults to get a little cooling, it was a wonderful refreshment for our young family members, while the water came down differently on our skin. There is also a 1 km long circuit for runners all around the facility. The course, which is equipped with a great covering and marked for use by runners, has always been used by many pedestrians, it is tempting to use the better pavement, which means that running was always an alternative running course. The Batu Caves could not be missing on our list for a second time.

Time passed too quickly. Throughout the journey we tried to spend more than enough time in one place to really enjoy everything, but nevertheless it was always too short. Our next destination was

Alongside to the ferries to the island, there were a lot of jellyfish in the water, not really great for bathing. In any case, these pretty creatures were apparently only in the ferry water in these quantities and so nothing stood in the way of a visit to the beach at our first quarter in Batu Ferringhi.

In our guesthouse there was also a german family with which we got along very well. We made our way to the island’s capital – Georgetown – after the end of our booked accommodation.

At the new accommodation we were a bit shocked at first, because it was a kind of a “shared apartment”. 3 rooms were rented to different people, with common living room/kitchen/bathroom, and this was not really clearly documented at the time of booking. But we were lucky that 95% we were able to live alone in the apartment, which also included a very long swimming pool.

Georgetown had many Durian sellers ready for us, and” Red Prawn” became our favorite variety, and we were allowed to taste many different varieties. Penang is a Mecca for Durian lovers. But prices are european, and that was the only reason not to sink into bliss all the time. At least we had to eat other foods *ggg*

Our obligatory visit to the Botanical Garden, as almost everywhere on our trip, was not to be missed. We also heard about a youth park that had some water pools ready for free use, also playgrounds (the tooth of the time had already gnawed at it) and could enjoy some cooling there.

The cog railway up to the “Penang Hill” flew (really flashed!) with us to the summit, but unfortunately the weather on this day was not very friendly to us and it rained. We still saved it as a great experience.

Georgetown itself had quite a lot of traffic, and the public buses did not necessarily stop at the stations when only tourists waited. Nothing helped – to call, wave and annoy – nothing, and so it was often a longer trip to one of the next stations with waiting locals to get a bus. Maybe the bus drivers had deals with the taxis?

The “Upside-Down.Museum” in Georgetown was funny with, sure, Durian as dessert, yummmmy

Our last destination before our trip back to Austria was Thailand, Phuket. Exploring how to get there (train, bus, minivan, …?) was really difficult, and we started with a minivan to

in which we had booked a nice hotel for one night. The swimming pool was right outside the room door and the incredibly friendly staff unexpectedly provided us with vegan food – we felt in great hands.

The next day we went to the bus station. Once there, however, we noticed that we had left our drone in the taxi, and the taxi driver was already gone. The bus station police, and many other people tried to help us, but unfortunately there was no way to locate the taxi driver. So we would then miss the bus, because we wanted to get our drone back. Almost at the same time as the bus was leaving, the taxi driver, who had noticed after his next passenger (or had read my Messenger message), suddenly came back that we had forgotten the drone and brought it back to us joyfully. We had not expected this anymore, and were very grateful for this beautiful experience. So we wanted to buy new tickets for the next bus, because ours had already left. The employees saw us coming, made a phone call, told us that they had told the bus driver, who was already on the way, to wait at his next station and charged us on a loading area of a truck and drove after the bus. For a ridiculous fee we could continue our journey in our booked bus.

This hospitality has once again shown us what luck it can be to travel, not in package holidays, but simply as ourself. Just pack a few things and go on a journey of discovery is something wonderful. Everywhere we met so many nice people in Australia, Bali, Malaysia and Thailand, and our children were allowed to get to know the world differently than the media and politics would impose on us.

Arrived in the much-vaunted

we moved into our large apartment (approx. 75 m2) in Kamala. The hotel had two huge swimming pools, a refreshing opportunity to get cheerful after breakfast.

Kathi wasn’t doing very well at that time and she was almost only in the apartment at the beginning. She slowly got better and she was able to enjoy the pool for a few more days. We didn’t like Phuket itself. In any case, we have not been able to discover the paradise that the catalogues advertise to us.

But such experiences are also important. It is also a warning sign to see what we humans do with our planet, everything we destroy. Phuket was not the only area.

And with a little yoga in the room, the thoughts and feelings are slightly grounded again.

This site uses Akismet to reduce spam. Learn how your comment data is processed.